Skip to main content
Written by Stephanie Schierhuber in Performances and Productions | 17.12.2021

What does Othello have to say to a modern audience?

“Othello is a problem play for a modern audience”, Jimi Bani and Jason Klawein write in the program of their Queensland Theatre production. The blatant racism and scenes of domestic violence make it a difficult play to stomach and raise valid questions about the value of staging such a production. Racism, misogyny, and violent cruelty - does Othello have anything to say to a modern audience that is worth listening to?

Wa (yes), Bani and Klarwein’s production affirms loud and clear. Set between Cairns and the Torres Strait during World War Two, Bani and Klarwein’s production uses the familiar military setting of Othello to illuminate the under-acknowledged history of the Torres Strait Light Infantry Battalion – the only all-Indigenous battalion in Australian military history. It is the first time in Queensland Theatre’s history that Othello has been produced and the first time that a Torres Strait Islander has played the titular role.

For a modern, non-Torres Strait Islander audience, early modern English may be as unfamiliar to our ears as Kala Lagaw Ya or Youmpla Tok. The risk of a tri-lingual production is that an unfamiliar language (whether early modern English, Kala Lagaw Ya, or Youmpla Tok) may leave the audience disengaged from the performance and unable to contribute to the conversation. By creating a performance that provides each language equal billing, Bani and Klarwein's production avoids this risk.

A beautiful example of this opening of conversation through the play's multilingualism occurs in the progression of Desdemona’s interaction with Torres Strait culture and language. Until the arrival of Desdemona in the Torres Strait, Kala Lagaw Ya and Youmpla Tok were only spoken by Torres Strait Islanders (Othello, Cassio, Montano, and Soldier/Dancers). Not long after Desdemona’s arrival in the Torres Strait, Othello asks her a question and she responds with wa (yes), which Othello responds to with overt enthusiasm and encouragement. The unfamiliar language/s, as this moment between Othello and Desdemona illustrates, invoke a “spirit of unity” (Bani & Klarwein, Othello Program) that invited the audience to practice thalinga (deep listening) and to co-create a multilingual conversation. 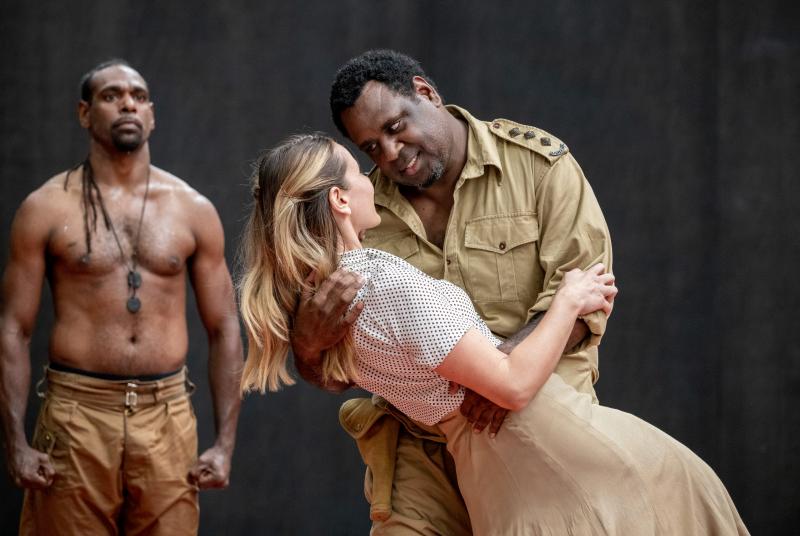 The use of the three languages also has the effect of reorienting our relationship with Shakespeare and his works. Shakespeare is afforded a foundational place in English culture that is treated as almost timeless and eternal. Set against the language of a culture that has existed for thousands of years — a language that is the vehicle of lore and the voice of story and song — the perspective of the timescale of his cultural power shifts.

The effect is to bathe Shakespeare’s works in the light of youth as the history of the Wagadagam stretches out for generations far beyond them. This perspective change forces the audience to consider far older stories that (like Shakespearean soliloquies) have been recited for generations. The equal value and importance of these stories alongside the formative works of colonial history is rightfully asserted by Bani and Klarwein’s production as it celebrates the transformative power of diverse storytelling traditions.

Bani and Klarwein’s set design and staging decisions were a masterclass in concealment and revelation that echoes the play’s central concerns about seeing and not seeing. The minimal black box studio style theatre at Bulmba-ja Arts Centre in Cairns contained only a modest and shallow wooden stage that was hung across the back with sheer white curtains. The onstage props were similarly minimal and leaned into the play’s military and cultural setting. Fold up beds, collapsible camp chairs, Warup drums and travelling cases were ported on and off stage by the cast as part of the play’s action.

Although simple, the sheer curtains were a flexible and apt set for a play concerned with the clarity of the senses – particularly vision. At times, the filmy fabric worked to reveal and conceal entrances, exits, and onstage eavesdroppers as a sheer hallway along the back of the stage. At other times sheer drapes were the bed hangings that shrouded Desdemona’s bedtime preparations before opening to reveal the full horror of her death to the audience. Sometimes the simple sheer swathes forced upon the audience a sudden realisation, much like Othello at the end of the play, that they have not seen clearly.

The most brilliant example of this realisation of concealment was at the location shift from Cairns to the Torres Strait. At the beginning of the scene a warm tropical breeze blew through the theatre from the back of the stage over the audience and billowing the curtains. As they wafted over the empty stage they slowly opened revealing (to the audibly delighted audience) a pool of water where the back half of the stage would ordinarily be.

The watery spectacle not only conjured the naval context of Othello but also signified the island setting and the important and enduring cultural connection Torres Strait Islanders have with the sea. A moment after the unveiling, Montano burst forth from beneath the surface of the pool. His entrance not only reinforced the themes of revelation and concealment but reaffirmed the core message of Bani’s and Klarwein’s production – the careful reconsideration of what we think we know and understand.

Bani and Klarwein’s Othello demonstrates a marvel of modern theatre that effortlessly brings the cultural force of Shakespeare and the much older culture of Wagadagam into conversation with one another. Their production shows that with considered attention and thalinga (deep listening) Shakespeare’s problem play does indeed have much to say to a modern audience.

Othello played as part of the Cairns Indigenous Art Fair (CIAF) in November 2021, and will also form part of Queensland Theatre’s 2022 season.

Biography: Stephanie Schierhuber recently completed her double PhD in early modern literature at the University of Groningen (NL) and James Cook University. Her research interests are early modern drama and poetry, sleep and watch, theories of extended cognition, and health and medical humanities. Her PhD explored how sleepers in Shakespeare's drama and Spenser's Faerie Queene extend their cognition beyond their bodies in order to supplement their biological attentional capacities. In between her work as Marketing and Client Experience Coordinator, North Queensland at GHD, she is preparing her PhD research for publication.