Skip to main content
Written by Claire Hansen in Performances and Productions | 03.04.2017
In her opening remarks prefacing the screening of her theatrical production of A Midsummer Night’s Dream, director Julie Taymor spoke of a new kind of digital experience – the magic of theatre captured on film. She differentiated this from the ‘CGI’ magic of cinema, though; this magic, she said, is all real. 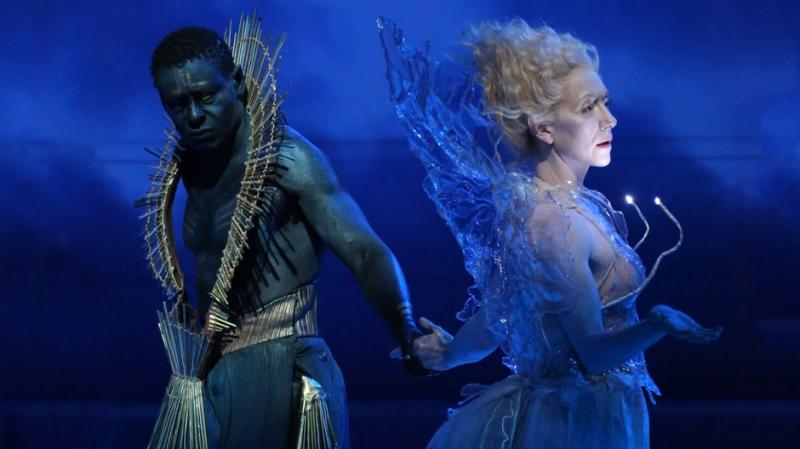 The screening at Sydney’s Seymour Centre on 1 April 2017 was received very much like a live play: applause at interval; mid-scene applause when an actor’s work was particularly appreciated; and very vocal laughter.
Although at times I felt frustrated that I could not choose the direction of my gaze – I had no option but to look where the camera looked, rather than to direct my focus to whatever aspect of the staging intrigued me – the screening of the play was still an immersive, effective theatrical experience.
The design of this production is its most overwhelming element (sets by Es Devlin, costumes by Constance Hoffman, lighting by Don Holder, projections by Sven Ortel). The aesthetic of the cloth – born above the stage for most of the production – was especially striking. In the opening scene, Puck lays down on a simple bed onstage. The bed then begins to rise to the ceiling – literally growing out of the ground, with branches guiding its progress to the sky. Cloths from the rising bed are drawn out by ropes manipulated by workers on the stage. The cloths spread out until they become a canopy across the ceiling. The effect is rather spectacular. One of the workers then takes a chainsaw and destroys the connecting branches beneath the bed.
This canopy of cloth becomes a fabric upon which the aesthetics of the play are repeatedly written: when Puck (Kathryn Hunter) makes his/her first entry (for Puck is deliberately androgynous here), she enters from above. We see black branches begin to bleed out from the centre of the canopy, like spreading ink or blood, and then Puck’s figure emerges from this leafy silhouette, and she descends, head-first, to the stage.
This growth of the bed out of branches, and the intermingling of Puck’s body with branches, are the first of a strong visual thematic which is interested in the intersection of body and natural world. Dream is, of course, a play very interested in the relationships between humans, fairy, and the environment.
The canopy of cloths is the canvas upon which leafy images are projected to create Titania’s sumptuous bower; and when she welcomes Bottom into her bed, projections of the love-in-idleness flower blossom, the colours bleeding outwards to dominate the cloths in an unsubtle gesture towards the mix of sexuality, fertility, artificiality and nature at play.
This preoccupation with representations of nature is repeated throughout; as the lovers make their way through the woods, the forest is represented by black-cloaked figures holding long sticks, which are moved about to allow or obstruct the lovers’ passage. Hermia’s nightmare of a serpent biting her breast is brought to life in a similar way; the lighting becomes an eerie green, and we see the flashes of a green snake slithering around and over her. Compounding the aesthetics described thus far is a vaguely tribal design used to costume the fairies, who tend to speak together like a chorus, and who often ‘fly’ with help from the same black-cloaked figures; making the fairy children instruments of the forest, much like the trees.
Oberon and Titania’s costumes are breathtaking. Titania (Tina Benko), a stunning embodiment of Diana, looks very much like a personification of the moon: she is pale and glowing, two lights attached to her costume directed onto her face to give a gentle light. Clear, glass-like material – almost wing-like – emerge from the back of her gown, and this also contains its own lights. By contrast to Titania as moon, Oberon (David Harewood) is the sun: painted with gold tribal markings, bedecked only in black and gold, the aesthetics of the fairy couple’s costume produces a perfect harmony by opposition. Upon their first meeting, the cloths descend to the stage, creating a roiling, seething storm that brings to life the environmental distemper their disunity has created.
The supernatural environmental world dominated my attention; the production design which generates the fairy world is far more powerful than that used to conjure Athens. The mortal world is represented by the façade of an impressive, stately white home. The staid whiteness of the home contrasts to the whiteness of the cloth, upon which is projected the vivacious colour of the fairy and natural worlds. This whiteness is extended into the final celebratory wedding scene; a surprisingly traditional western affair, with a large cake cut and distributed in slices to the screaming children.
The mechanicals feature a Bottom straight from New York (Max Casella), a Latino Flute (Zachary Infante), and an openly gay Starveling (William Youmans). Their Pyramus and Thisbe, always a crowd pleaser, was marked by the surprisingly powerful performance of Thisbe by Flute, and a Moon very irritated by the interruptions of his noble audience.
Lilly Englert stands out for a captivating turn as a particularly silly, petulant, but endearing Hermia. The lovers’ fight scene – which ends with them consecutively disrobing (as many productions do) – was made inventive by the addition of an audience of fairy children around the stage throwing in pillows to aid in the fight.
Hunter’s Puck, though, for me seemed to fit awkwardly with the production. An androgynous contortionist, Puck is costumed very differently to the fairies; not a trace of tribal aesthetic, she wears grey overalls, but moves in a similar way to the fairy children. Her white face paint renders her not clown-like but perhaps carnivalesque. For me, this was at odds with the rest of the production.
The ‘visions’ that do appear and linger in Taymor's A Midsummer Night's Dream are the aesthetics of this production's design of the fairy and natural worlds.