Skip to main content
Written by Claire Hansen in Performances and Productions | 23.05.2016
In Sport for Jove’s current production of William Shakespeare’s The Taming of the Shrew (directed by Damien Ryan), we are immersed in the glamorous old world of the silent film era and its ‘wild west’ genre. The enchanting Bianca (Lizzie Schebesta) is a film star who from the start exhibits a desire to be heard and not only seen in the world of silent film – an elegant metaphor for the broader gender concerns of Shakespeare’s play. Indeed, throughout, we see a more complex and darker Bianca than just the lighter, sweeter, simpler opposite to her sister Katharina (Danielle King). Their father Baptista (Robert Alexander) is a powerful director and, it seems, wealthy studio executive, while the ‘aviatrix’ Katharina quite literally descends and overturns the neat, orderly, artificial cinematic world with its sets, its theatricality, and its repetition. 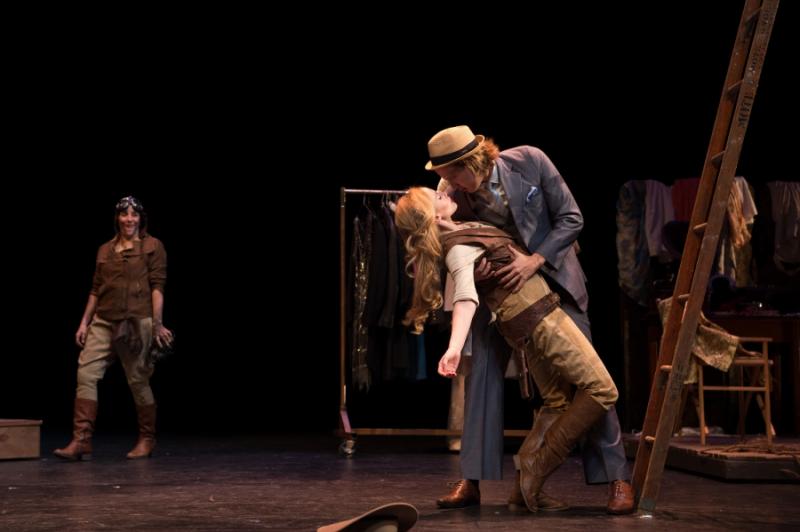 This production, as is typical of many Sport for Jove productions, boasts a strong ensemble cast who display an incredible rapport which generates an authentic sense of community. The set design (by Anna Gardiner) and set changes are seamless and inventive; the music (sound designer Tom Allum) integral to the creation of this world; and the screen above the stage – used for the silent film text, and to display revealing film reels (such as Gremio’s (played by Barry French) promises to Bianca) – really brings home how the choice of context can enrich and illuminate Shakespeare’s play. There is something delicious and irresistible about the glamour of the film world – we see it in Lucentio (Christopher Stalley) and Tania’s (Eloise Winestock) enchantment with the set in which they find themselves; we see it in the drawing-in of a seemingly unsuspecting spectator, transformed into an imitation of the famous actress ‘Vincentia’ (Angela Bauer); and we see it in our own delight of this magical, unreal world.
The decision to gender swap Lucentio to a school mistress ‘Gretchen’ (instead of disguising himself as the male school master Cambio), and to allow his sister ‘Tania’ (originally Tranio, his male servant in the text) to disguise herself as her brother, is quite brilliant. This, of course, brings Shrew into alignment with Shakespeare’s fondness for gender swapping (in As You Like It and Twelfth Night, for example) and uses in particular Twelfth Night’s conceit of a sister dressing as her brother. We see further gender swapping in the decision to make Lucentio’s father in the text instead a film star, ‘Vincentia’, and in having Hortensio (a standout performance from Terry Karabelas) dress as a female Spanish music and dance teacher. These complications of gender performativity in a play for which gender is already so contentious makes for some hilarious and thought-provoking moments. 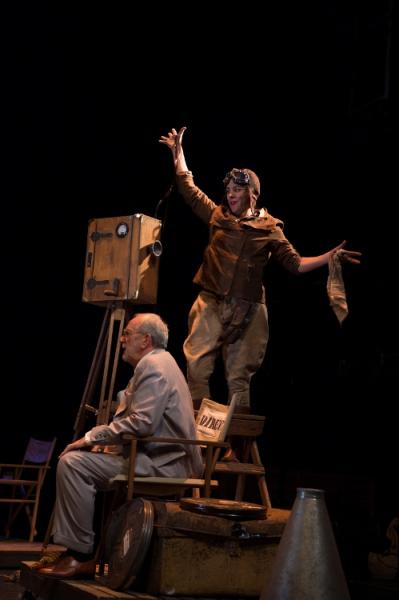 Katharina, to me, was more tragic than comic. As noted by Damien Ryan in his Director’s Notes, she is frequently unable to express herself verbally – resorting to either violence or sound (for example, her use of the harmonica during her first encounter with James Lugton’s Petruchio). He writes:

Kate is quite unlike the more intellectually demonstrative Beatrice in Much Ado About Nothing. Kate’s pain is deeper and her world sadder, sometimes she does not use words to express that pain, sometimes she simply smashes guitars over people’s heads or merely finds the strength to scream “Ha!”.  We have explored several moments where she makes her own symphony of sound, representative of the heaviness of her pain. Sometimes words don’t help and that is true for all of us.

However, the play does not offer a solution to the infamous crux of Katharina’s final capitulation. From my perspective, Sport for Jove’s production leaves this problematic and unresolved – but this is, perhaps, the best way to respond to The Taming of the Shrew. In choosing not to resolve, adapt, minimise, or ‘solve’ this issue, it leaves the issue as a question for the spectator. As Ryan comments: ‘How are we supposed to react? However you like.’ Having said this, the raw reactions of the female characters onstage to Katharina’s speech – Vincentia’s shocked laughter; Tania’s attempts to interrupt followed by her disgusted exit, even Bianca’s distaste – embody the modern reader’s difficulty with this text. It grates in interesting and productive ways with Kate and Petruchio (literally) flying off into the sunset.
For more on the complexities of The Taming of the Shrew, see the Director Damien Ryan’s extensive Director’s Notes.
Tags:
theatre review
Sport for Jove
The Taming of the Shrew
gender