Some of the Shakespeare Reloaded team headed up to the University of Southern Queensland this week for the Australian & New Zealand Shakespeare Association Biennial Conference. 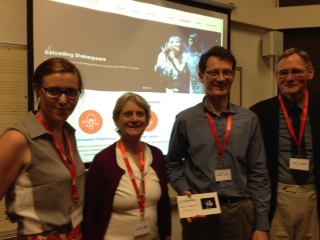 Team members Liam Semler, Will Christie, Penny Gay, and Claire Hansen were all in attendance and presented a preview launch of the website to the attending academics and educators. We had a great audience and received some very positive feedback.

Penny Gay and Claire Hansen also presented some of their latest research at the conference, with Penny discussing eighteenth-century "mash ups" of Rosalind in As You Like It, and Claire presenting on how to use complexity theory to understand Shakespeare as a decentralised phenomenon.

The team is eagerly awaiting our official website launch on 7 November, 2014.