Skip to main content
Written by Claire Hansen in Performances and Productions | 11.01.2017

It is the connectivity of the people who populate Cheek by Jowl and Pushkin Theatre’s production of Measure for Measure (directed by Declan Donnellan) which is most striking. The play opens silently, as the group of actors, bunched tightly together, move in formation across and around the stage. They become separated from one figure – the Duke – who controls them. But it is increasingly clear that his hold on power is not complete; at one point the crowd descend to their hands and knees, crawling towards the Duke (Alexander Arsentyev) like predators preparing to attack. He stops them with a panicked gesture – a gesture he only half-believes will work. This is the impetus for the play’s action: the Duke, too lenient with his people, temporarily transfers his power to Angelo (Andrei Kuzichev), who rules in the Duke’s supposed absence. 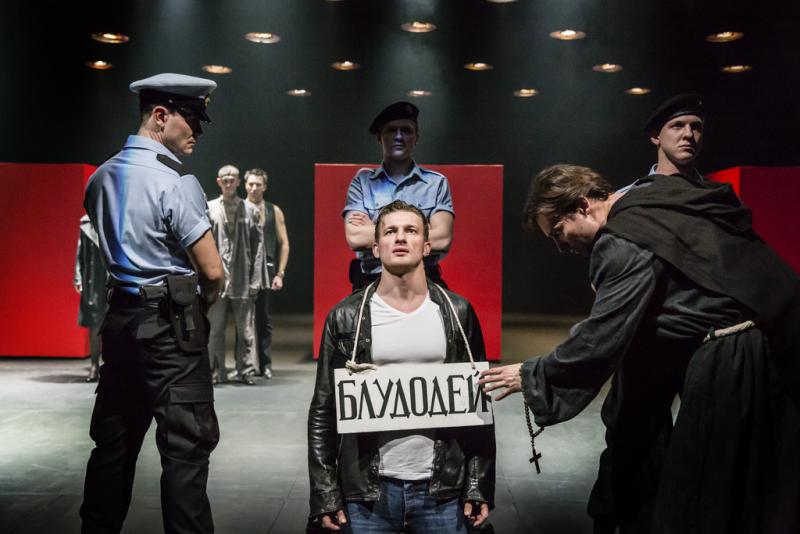 This small crowd or microcosmic public remain throughout the performance, sometimes broken up, sometimes reforming, sometimes losing a member or two, but eventually coming back together. When the novice Isabella weeps, the crowd, bunched at the opposite side of the stage, weep too, beating their heads as she beats hers. When the Duke puts on and puts off his disguise, it is with the aid of the crowd, who in the final scene present the Duke with the suitcase containing his costume. A broader sense of public is invoked when the characters gesture outwards beyond the fourth wall. When Isabella – in a strong, passionate performance by Anna Khalilulina - threatens to make public Angelo’s request that she relinquish her virginity to him in exchange for her brother Claudio’s life, Angelo asks: ‘Who will believe thee, Isabel?’ (2.4.154) He gestures outwards to the audience, waiting in silence, daring us to say something to support Isabella. Of course, nobody does, because as well-behaved spectators we are cued to act – or not act – in certain ways. We are complicit in Angelo’s corruption, because the production spotlights the inherent connections between public and private, individual and group, politics and performance. It reinforces the play’s interest in the mobility of power; the way it moves between individuals, and the way it is a kind of chimera perpetuated by the people who obey it.

The stage of this production of Measure for Measure – brought to the Sydney Theatre Company as part of Sydney Festival – is dominated by large red cubes (design by Nick Ormerod). The three centrally-placed red cubes will at times be pivoted to reveal framed performances within them – Claudio strapped to an electric chair; Isabella in prayer; and a couple in coitus – and later play a central role in the final denouement. The production, performed in Russian with English surtitles, becomes – for those not versed in Russian and/or perhaps not familiar with the play’s narrative – an exercise in balancing between written words and actions. This tension actually serves to reinforce the political duplicity in the play.
Measure for Measure highlights the way we distinguish between the law and the people who implement it, in contrast to the lack of distinction made between infringements against the law and those who commit them. The mobility of power and the transferral of authority is interrogated throughout, and the production frequently reveals the hollowness of these concepts as the distinction between power, authority and those who wield them collapse. The play is of course explicitly concerned with sources of power and control: politics; physical brute strength; religion; sex; and masculinity. The Duke relinquishes one power when he transfers his authority to Angelo, but in becoming the Friar, takes up another form of agency. Yet religion offers little protection for Isabella. Even when imprisoned and at the mercy of governmental corruption and his sister’s virtue, Claudio (Kiryl Dytsevich) still physically overpowers Isabella when he throws her to the ground and attempts to rape her. Her religious devotion is ignored as Angelo repeatedly shushes her, removing her shoes and stockings in an attempt to sexually assault her. These concerns are heightened by a constant police presence visible throughout the production. 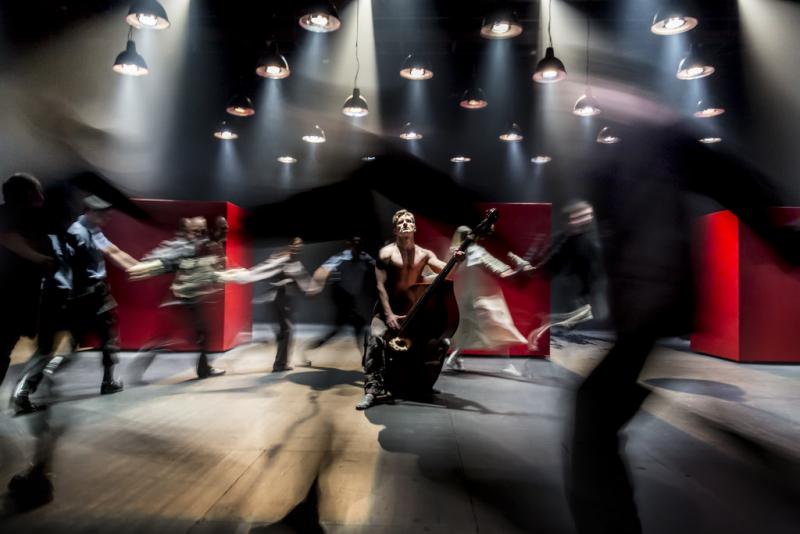 Importantly, though, this production seeks to illustrate the farcical nature of power constructs. As the Duke relays his plans to use Mariana (Elmira Mirel) in place of Isabella to complete the bed trick, the characters join hands in a chain dance. When the disguised Duke tries to prepare the prisoner Barnardine for death in order to substitute his decapitated head for Claudio’s, an upbeat waltz plays and the prisoner and the Duke dance together (with fascinating choreography by Irina Kashuba). The waltz is picked up by the full cast, who at varying times engage – together or apart – in the waltz across and around the stage. The machinations of power are shown to be hollow performances set to old, familiar, repetitive tunes. 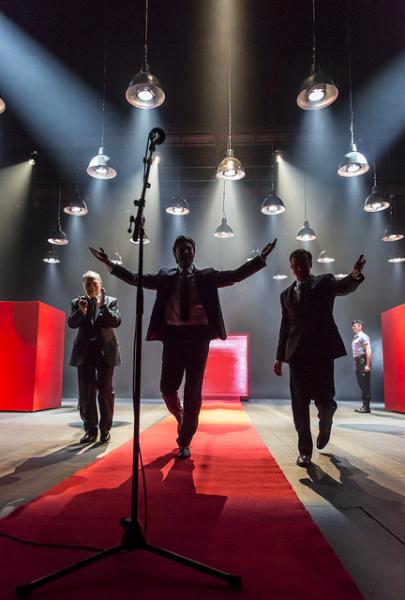 This is emphasised in the final scene, where the central red cube is moved upstage and turned to reveal its empty centre. A red carpet is rolled out downstage like a long red tongue, and a microphone is placed upon it. Many of the characters fastidiously avoid stepping on the carpet – in seeming reverence for something: celebrity, public spotlight, political control? Angelo even bends down to pluck stray dirt from it. A soundtrack of crowd applause plays loudly as the Duke takes his place at the microphone, playing the puppet-master for this final scene. He again gestures to this unseen crowd, controlling their responses, entirely in opposition to his earlier claim that ‘I love the people, / But do not like to stage me to their eyes’ (1.1.68-9). Measure for Measure here focuses intently on the relationship between publics and performances. And with its red carpet, its spotlights, its microphones, and its audience track, the performativity and celebrity element of politics in the play is underlined.
Perhaps because of this, Shakespeare’s Measure for Measure has been called ‘Shakespeare’s most American play’ (Chris Jones in The New Oxford Shakespeare, ed. Gary Taylor, John Jowett, Terri Bourus, and Gabriel Egan, Oxford: OUP, 2016, p. 2195). And as much as it is a cliché to point to Shakespeare’s enduring relevancy, his timelessness and universality, there is an undeniable pertinence to Cheek by Jowl and Pushkin Theatre’s production of Measure for Measure. This production is situated at a time when western politics – most prominently, US politics – is collapsing distinctions between celebrity and politics (witness, for example, the recent political commentary at the 2017 Golden Globes as well as the current President-Elect’s response to it). It is situated at a time when footage of that same President-Elect boasting about his sexual conquests of women generates no ramifications for his political position: he escapes – as Angelo does – despite both men’s inability (or refusal) to differentiate between political, personal and physical agency.
Tags:
Measure for Measure
theatre review
Sydney Festival
Sydney Theatre Company