Skip to main content
Written by Penny Gay in Performances and Productions | 08.09.2016

The production was not an entirely successful hybrid, in my opinion. The Globe’s stage was ‘dressed’ with black wrought-iron entrance/exit doors and cages around the pillars; a large triangle of silky fabric was let down from the heavens to cover activity using the trapdoor (the witches, Banquo’s ghost). 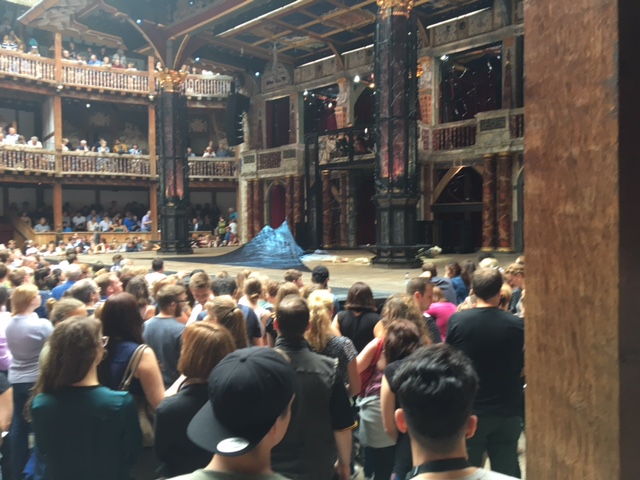 There were occasional intense lighting effects from upstage lights; there was fog; and the music played and sung in the gallery – in a Middle-Eastern style, but in Latin and some other languages – occurred not only between acts and scenes, but also as an underlay to some scenes, such that the actors’ words were obscured. Overall, one would say that an Expressionist aesthetic was the intention – as though Shakespeare’s astonishingly atmospheric writing in this play couldn’t be trusted to work on a bare stage in daylight. This struck me as unfair to the work of the actors, particularly Ray Fearon as Macbeth, who had clearly considered the weight of every word and syllable – he spoke at all times with clarity and passion. Lady Macbeth (Tara Fitzgerald) gave her role the familiar outlines of the fashionable Tory wife, ambitious for her husband and the trappings of power – and with a tendency to take the line ‘That which hath made them drunk hath made me bold’ as a guide for all occasions. Nevertheless, her utter collapse on ‘You lack the season of all natures, sleep’, at the end of the banquet scene, was shockingly effective. 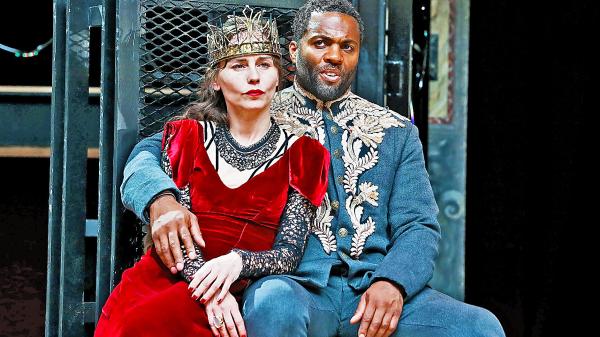 Further evidence of Expressionist-style thinking about ‘how to make the play work’ was the presence with the Macbeths at home of a ‘ghost child’, both acknowledged and ignored by them. The effect was simply confusing (especially as the child was charming and very much alive in appearance and behaviour).
There were attempts to incorporate the unique nature of the Globe’s architecture and its audience of rowdy (and occasionally, on this stifling day, fainting) groundlings. The Porter’s scene is fair enough – obviously written as a stand-up comic role, and brilliantly performed with appropriate improvisations by Nadia Albini. But the attempts immediately after the interval (3.5/6) to turn Lennox’s summarising speech into a quasi-revivalist meeting, with the audience chanting responses, seemed inappropriately comedic – the state of the nation reduced to an opportunity for including the audience. I also thought that the constant use of the crowded yard for characters’ entrances and exits (complete with more improvised lines, ‘Make way!’ etc) was time-wasting and distracting. And, dare I say it, inauthentic.
Macbeth is a high point of Shakespeare’s imagination, his poetic genius, and his profound insight into human psychology. Give it to good actors who have done their homework on the lines, and its power to disturb and move won’t fail – no need for anything else.
Tags:
Shakespeare
Macbeth
theatre
review