Skip to main content
Written by Claire Hansen in Performances and Productions | 20.09.2018

Every year Townsville-based theatre company TheatreiNQ stage ‘Shakespeare under the stars’ in Townsville’s glorious Queen’s Park; a short walk from the beachside promenade, the Strand, and in the shadow of Townsville landmark, Castle Hill.

This year’s production of TheatreiNQ's The Comedy of Errors – directed by Terri Brabon – had a distinctly western flavour; in fact, a great deal of energy has clearly gone into world creation for this production. I felt as if I’d walked into a movie set or fantasy (west)world; the Porcupine saloon, the jail, the two-storey Phoenix, the church and a graveyard (complete with punny tombstones) had been constructed in the middle of the public gardens (set design and construction by Brendan O’Connor). 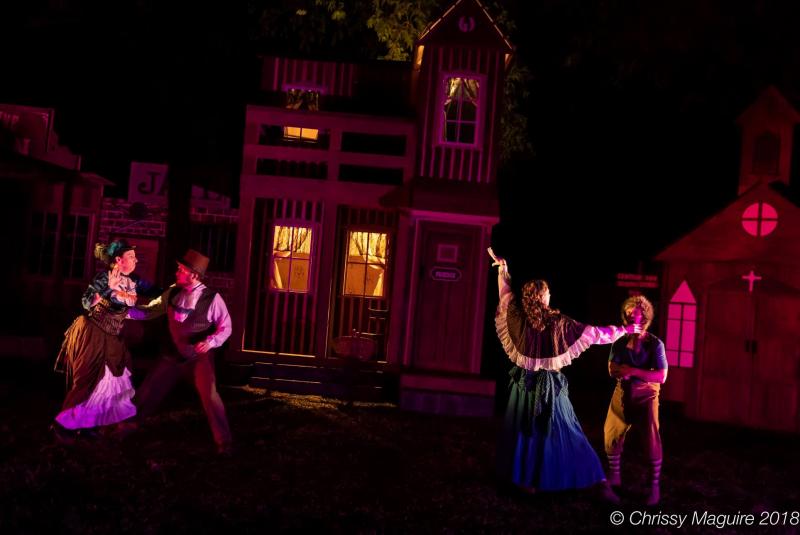 The mood is set before you take your seat; actors (in character) staff the bar and there are hay bales available for seating.

The sense of genuine world-building in this production went far beyond the set itself. The large ensemble cast (a cast of over 20 – sometimes all onstage) produces an exceptional sense of community which brings the western world of Ephesus to life. The opening montage of movement and tableaux was seamless, impeccably timed and – before even speaking a word – generated a sense of the community into which the Syracusan Egeon intrudes.

This opening scene is one of many examples of TheatreiNQ’s spectacular blocking and choreography. When Antipholus and Dromio (of Ephesus) are thought to be possessed and are bound with rope and confined to Adriana’s house (Antipholus’ wife), there is a truly incredible scene of organised chaos in which the characters onstage fall into an excessive slapstick routine as Antipholus and Dromio evade the ropes, and Antipholus attempts to attack his wife, infuriated at her claim that he has lost his ‘true sense’ (4.4.43). Characters jumped and dived and dashed across the stage with such perfectly constructed randomness, collisions and near misses – ending with Antipholus and Dromio entrapped in rope and encircled by the cast – that it drew a round of applause from the audience.

Brabon’s production spends time on the detail: small additions to the playworld make a significant contribution to the community generated. There are two young schoolgirls with no lines, but who are consistently involved across the course of the narrative; props that they play with thoughtlessly end up having a role in the major plot development. They engage at various points with the Abbess, Doctor Pinch, and even at one point steal into the saloon. Following the girls’ silent backstory as the plot moves forward lends extra depth and nuance, and is another example of the clever and complex world-building at work. The Comedy of Errors is finely tuned; there is beautiful detail in almost every moment, each actor imbuing their work with refined touches that speak to the cast’s energy and enthusiasm. A deep understanding of the story and language is also consistently shared with the audience through exceptionally clear and illuminating physicality.

The Comedy of Errors translates well into the western genre; the saloon prostitutes, the Christian overtones of the Irish schoolmaster (Doctor Pinch) and the evangelical mockery surrounding the attempted exorcism provide a familiarity to accompany the play’s antics.

In particular, Antipholus and Dromio of Syracuse’s utter confusion at the behaviour of the Ephesians leads to their belief that the locals are all possessed or witches. This perspective is shown quite brilliantly to us throughout the production. Dromio describes the approaching courtesan:

DROMIO OF SYRACUSE Master, is this Mistress Satan?

ANTIPHOLUS OF SYRACUSE It is the devil.

DROMIO OF SYRACUSE Nay, she is worse, she is the devil’s dam; and here she comes in the habit of a light wench. And thereof comes that the wenches say, ‘God damn me’ – that’s as much to say, ‘God make me a light wench.’ It is written they appear to men like angels of light. Light is an effect of fire, and fire will burn – ergo, light wenches will burn. Come not near her.

When the saloon courtesans approach the Syracusans, they come from the graveyard; the lighting changes to an eerie blue, and they speak preternaturally slowly: “Your man and you are marvellous merry, sir.” (4.3.51). The long, slow, drawl – accompanied by strange, slow, encroaching movements towards the men – is genuinely eerie. But with a quick lighting change, we see that this is the perspective of Antipholus and Dromio; the courtesans are not crawling like supernatural beings out of the graveyard; they are speaking at an ordinary pace and simply baffled by the men’s behaviour. In this way, Brabon’s production homes in on the subjectivity of perspective and allows fascinating moments of insight into how the Syracusans are experiencing the world of Ephesus: strange, frightening, and perhaps magical. This also illuminates how the world is seen as othered; Ephesus, to the new arrivals, is so bizarre in its people’s behaviour that it can only be explained away by reference to the supernatural – just as the men’s erratic behaviour is explained away by possession. TheatreiNQ’s production delves into how strangely we interpret out worlds. 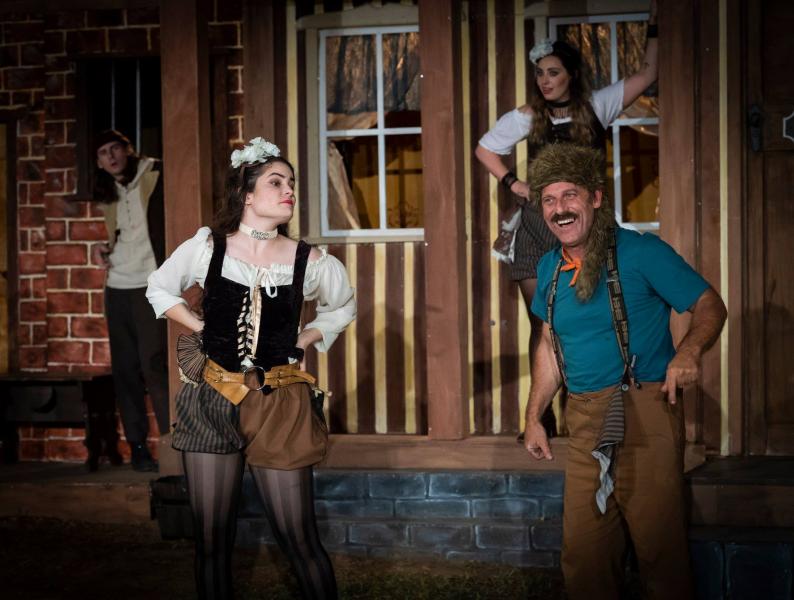 Clever moments included the decision to stage Egeon’s retelling of his past (at the opening of 1.1) as a silent film. The sheet hung earlier form the balcony of the Phoenix by Nell (Kellie Esling) becomes the backdrop for the silent film; which is a beautiful and highly entertaining way to engage the audience right from the start – a clever solution to a long speech.

Standout performances included Terri Brabon as Adriana; her Act Five retelling of the events to the Duke (played by Robert Street as a Sheriff, complete with star badge and oversized cowboy hat angled comically far too low) drew a round of applause. Brabon’s range, pacing, timing, depth, and speed make for a truly spectacular performance.

The Dromio’s – Syd Brisbane (Syracus) and Brendan O'Connor (Ephesus) – are always crowd favourites and did not disappoint, with exceptional slapstick comedy. The ‘Antipholi’ - Michael Gleeson as Antipholus of Syracuse and Ron Pulman as Antipholus of Ephesus - were also standouts. The Italian goldsmith, Angelo, (Bernie Lanigan) proved hilarious in his frustrated attempts to manage the sale of the chain, and saloon courtesans (Parish Walsh and Shai Regan) were entertaining and essential to the play’s humour and atmosphere. It is, however, very much an ensemble production and its real magic lies in this.

Lighting and sound effects were seamless and highly effective in terms of mood and humour. Music choices drew much laughter, including the gun-slinging showdown theme song from The Good, The Bad and The Ugly and Cotton-Eyed Joe.

There is a real sense of joy and fun here that goes hand-in-hand with an insightful and intelligent production boasting real perceptiveness. TheatreiNQ’s The Comedy of Errors excels because a brilliant ensemble, impeccably timed, engage in a rousing, hands-on immersion into their fantasy that leaves you feeling you’d like to stay in their world just a bit longer.

The Comedy of Errors is onstage at Queen’s Park from 18 September – 30 September in Townsville.