Skip to main content
Written by Claire Hansen in Performances and Productions | 13.03.2018
The oversized gold earrings, the rings on most of her fingers, and the slightly wild, playful hair are the only visual connections to our stereotypical idea of Cleopatra. No black wig in sight, no heavy kohl eyeliner, no weighty gold headpiece.
This, of course, is probably a sensible decision – but I can’t help but confess to feeling a little disappointed at the restraint. Cleopatra is if nothing else, excessive.
Enobarbus’ description of her illuminates precisely this – and it is a speech performed spectacularly by Ray Chong Nee in this production:

I will tell you.
The barge she sat in, like a burnished throne,
Burned on the water; the poop was beaten gold;
Purple the sails, and so perfumed that
The winds were love-sick with them; the oars were silver,
Which to the tune of flutes kept stroke, and made
The water which they beat to follow faster,
As amorous of their strokes. For her own person,
It beggared all description: she did lie
In her pavilion, cloth-of-gold of tissue,
O’erpicturing that Venus where we see
The fancy outwork nature. On each side her
Stood pretty dimpled boys, like smiling cupids,
With divers-coloured fans, whose wind did seem
To glow the delicate cheeks which they did cool,
And what they undid did.
(2.2.200-215)

Here, Shakespeare’s play is mythologising Egypt and the Egyptian Queen. But this image is – at least in Bell Shakespeare’s production – already far in the distant or imagined past.
In Bell Shakespeare’s production, directed by Peter Evans, a filmy transparent curtain at times separates us from the stage, which is itself oval. A raised oval in the centre of the stage becomes the focal point throughout the production. The stage is filled with scattered modern chairs and footstools in pastel shades – pinks, greens, purples. The curtain is drawn across the front of the stage at various points to provide a backdrop for the projection of surtitles: information on the plot development, location and date changes. While the narrative trajectory (the changes in power, the battles and treacheries) were conveyed clearly for the spectator through these updates, the date changes to me seemed unnecessary. Shakespeare certainly had no interest in accuracy of dating, often compressing events to suit his purposes. Beyond reminding us of the historical basis for the story, the dates do not serve any meaningful purpose for the audience – especially when we see ‘BC’ projected onto an explicitly modern set. What this projection did accomplish was to generate a nostalgic gesture back to the days of silent films or ‘golden age’ classic epics; and that nostalgia does sit well in a play focused on Cleopatra’s love for Antony, whose best days are clearly behind him. 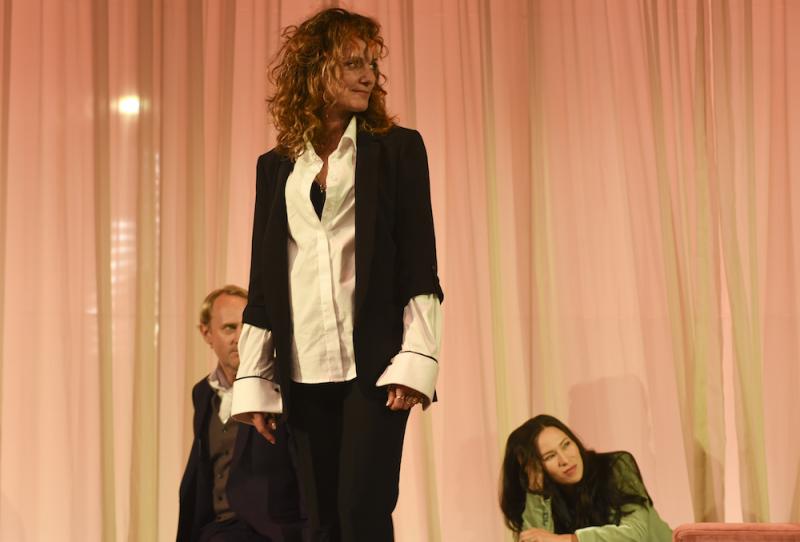 The costumes of Rome and Egypt are sleek and contemporary (Designer Anna Cordingley and Associate Costume Designer Emma Vine). Cleopatra and Antony are in suits, Cleopatra’s pant suit flares dramatically, her white shirt unbuttoned enough to glimpse the lingerie beneath. Antony’s tailored suit looks a little crumpled, and it’s a lovely moment when we see Antony (Johnny Carr) hastily throwing on a tie before meeting with Octavius Caesar and Lepidus, the other members of the triumvirate. Octavius (a polished performance by Gareth Reeves) is beautifully costumed in sleek turtlenecks and later an elegant grey coat; his success and determination oozes from these costume choices. Many of the costumes allude to a clearly corporate agenda. The politics of this production are less ancient and more twenty-first century business. Charmian’s costume stands apart from this; her femininity is accentuated with one of the few dresses onstage, and her strappy shoes suggest a hint of desert sandals. Jo Turner as Lepidus and the Clown is fabulously costumed; first in a violet suit – so unlike the other triumvirs, a threesome from which he’ll soon be expelled – and later as the Clown, in which he offers a wonderfully bizarre and dark performance.
Cleopatra (Catherine McClements) is hilarious, temperamental, cynical, and observant. The production highlights her isolation from the machinations of politics outside Egypt – distant and yet entirely determining her future. Her political powerlessness is made plain; especially when, during the triumvirate meeting, we see her circle the stage, on the outskirts, looking in. McClements hones in on Cleopatra’s cleverness; despite her swift mood changes and her tantrums, her Cleopatra is savvy and worldly, especially when the future looks increasingly bleak.
Other women have more central roles in the struggle for power: the production turns Pompey into a female leader, with the brilliant Lucy Goleby delivering a show-stealing performance. Pompey, in high heels and form-fitting skirts, is quick-witted and clever, and Goleby’s rich voice lends Pompey an air of authority. When she is drunkenly partying with the triumvirs, the freezes between the party scene and her discussions with the dangerous Menas (Joseph Del Re) are brilliantly and seamlessly handled.
Antony is a diluted form of his former self. There is no glimpse of the man Antony once was – the bold, confident, persuasive orator and political strategist in Shakespeare’s Julius Caesar; nor the man who managed to become one of the triumvirate. The reduced number of characters also lessened the impact of the abandonment of Antony’s supporters, something which deeply affects Antony and is central to his tragedy.
The sexual tension between the title roles is not palpable. The characters’ dynamic needs to rely upon their heated exchanges – whether in conflict or in lust. But onstage their disagreements seemed petty rather than grand – even when they fight over Cleopatra’s abandonment of Antony at sea, a betrayal of dire consequences. The scale of their relationship and its political and military ramifications never really sinks in. There is, though, a clear sense of care for each other evident here – especially in moments of casual intimacy, such as when, seated downstage, Cleopatra absently strokes Antony’s hair. 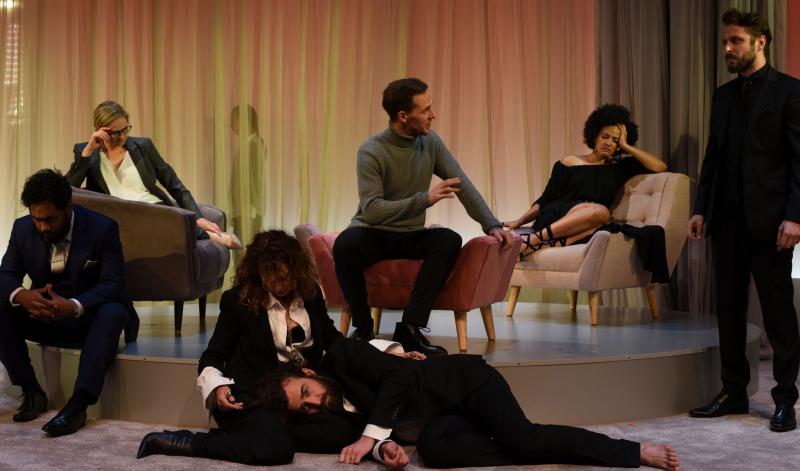 Cleopatra’s attendants: Charmian and Alexas – played with strength by Zindzi Okenyo and Janine Watson – are both central to constructing the world of Egypt and the power of the queen: it is their absolute loyalty to Cleopatra that lends her the authority she has in the production and is really the only clue of her power. Okenyo’s vocal contributions – at certain points she sings – were touching and beautiful.
Bold lighting design (Benjamin Cisterne) reinforced the play’s movement of locations: from red Egypt to blue Rome. This movement, though, felt undermined by the fact that characters remain onstage, frozen or watching the scenes unfold. In this way, the production is highly reminiscent of Bell Shakespeare’s 2017 production of Richard III, and in fact this link is explicitly drawn in the program: ‘We will continue what we explored in Richard 3 last year, where the stage could be an oval office or a hotel that gets taken over for a political campaign – they’re waiting spaces, they’re meeting spaces that work for Egypt or for Rome because everyone in this play is very powerful and they’re carving up the world and negotiating throughout it.’ (p. 16) The locations of this production are more figurative than literal; Evans imagines spaces for the negotiation of power.
When Cleopatra decides to “do’t after the high Roman fashion / And make death proud to take us” (4.5.91-2), she – and the characters around her – lose themselves in a dance to Nick Cave and the Bad Seeds’ 15 Feet of Pure White Snow. The stage is bathed in red as Cleopatra revels in the brief sense of liberation and agency provided by her control over her death. In this liminal dance space, she is afforded a freedom not available to her in Rome-controlled Egypt. There is also something to be said here for the production’s connection to the danse macabre. I have seen a similar choice made before a death scene in a Royal Shakespeare Company production of King John in 2012. However, in that production, the song choice was clearly tied to the narrative. In Evans’ production, I struggle to see the connection (the lyrics do give a sense of desperation and a desire to find something to aid the pain). It is a jolting intrusion that does not fit the rest of the production; but this sensation is, I imagine, deliberate. Antony and Cleopatra’s ends did not elicit the response in me that I had expected.
A play of such epic subject matter – about one of the world’s most famous women and a famous love story – raises high expectations. This production featured several insightful and powerful performances, but did not entirely showcase the passion, power or tragedy of Antony and Cleopatra.
For more details on Bell Shakespeare's production please visit their website.
Tags:
Antony and Cleopatra
theatre review
Bell Shakespeare